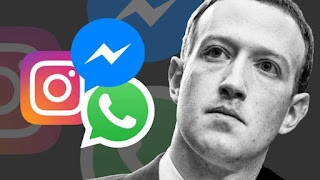 Facebook owner Mark Zuckerberg who owns Instagram and WhatsApp, has said they have made major changes to those networks to meet the needs of the people.

He said the company has made a change that has largely focused on ensuring the privacy of users of these networks, keeping more protection so that they may not see some users' contacts.

In his speech to the app experts, Zuckerberg says that in the present world ‘privacy’ is the first and most important thing.

He has described some of the changes made to include messages sent via Facebook Messenger will be ‘end-to-end encrypted’, that is, even Facebook will not be able to read them, and will continue to be so with WhatsApp.

Likewise, Instagram users will be able to post their messages even without uploading pictures or videos, unlike now.

In addition, making payments through WhatsApp as tested in India, will be possible for most countries in the world.

“I know now that we are not very trusted about protecting privacy.  We plan to add more power to all our infrastructure, but I know it can't happen overnight, ”the BBC memorizes Mark Zuckerberg.