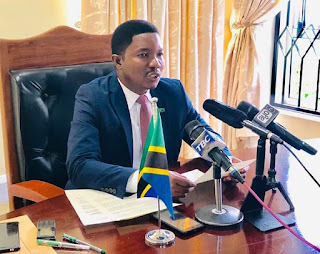 The Government through the President's Office Regional Administration and Local Government (OR-TAMISEMI) has received a permit to employ a total of 4549 teachers out of 91108 who submitted their applications.

Speaking to journalists in Dar es Salaam today 27 May 2019 Magogoni, Dar es Salaam, Minister of State OR-TAMISEMI, Seleman Jafo has said President Dr John Pombe Magufuli in ensuring the government is serving well for the citizens has decided to open a window for teachers.

Jafo said a total of 91108 applicants emerged and requested their applications in various positions and between 43770 equivalent to 48.04 percent had all the required attachments.

However, he said that 47338 applications equivalent to 51.96 percent had no criteria including lack of necessary attachments.

"Due to the high demand for teachers in primary and secondary schools for science subjects, Tamisemi has made an analysis and give priority to the work of third-grade teachers (A) a certificate for teaching primary schools.

In addition, Jafo explained that applicants for science and art studies had met the criteria and were unable to find a place for this period, their requests were analyzed and stored in the Tamisemi database.
He said to the teachers at the same time employment opportunities would emerge from the labor market.

"A total of 4549 teachers have been specially trained to teach schools with a demand for teachers where 3059 primary and 1490 secondary schools," he said.

Jafo said that all teachers who have been employed are required to report to the Councils of schools that have been assigned to ensure their certificates and fill in employment contracts.
Jafo said new teachers who would not report at their centers by May 21, 2019 their positions will be filled directly with teachers who have not been named without informing them.

"The Board of Directors should not accept the work of teachers without the permission of OR-TAMISEMI Secretary. However, he said to an employee who would report and take a subsistence allowance.