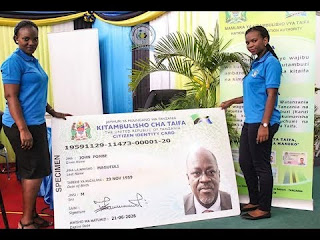 These complaints took place yesterday in Babati, about the case that is headed by the local office through the CEO and some local government officials.

One of the residents, Mustafa Rwamcho, said he went one day to the local office so that he could take his National identification card, but was denied the claim that he should contribute to the School of Babati Day Secondary School, TSh.  10,000 would have been given her identification.

“After I asked to give them money I decided to leave it and I have not yet go back and I don't know what it will be, because this identification is needed, for example if you go abroad you may have to show that identity, to prove your citizenship,” said Rwamcho.

In addition, he said because his economic situation was not good, he left the identity card while saying that continuing to miss it would cause further problems because the communications authority (TCRA) need mobile phone users to register their Sim Card with these tags.

“Since President Magufuli said these tags are free, I ask him to help us answer these leaders, who sell us tags when they have to be given free of any kind,” he explained.

Another resident, Leah Mapinda, said she is surprised at the local office, charging the money while claiming her little money was paid and insisting that if they continue to lead some people who are not able to get the IDs.

Mapinda interviewed last year did not receive Shs.10, 000, but this year the leaders are starting to charge them, but it is their right to get the National IDs.

Another resident Musa Rajab, who said that officials are demanding money from the people in issuing their IDs are violating the instructions that have been issued by the Minister of Internal Affairs, Kangi Lugola and President John Magufuli when they are on their tour.

On the other hand, the leadership of Nyunguu, refused to discuss the allegations and provide conditions for the approval of the City Council of Babati City Council.

And the director of the Council, Fortunatus Fwema, said the ward or local leadership will be responsible for the procedure and if there are citizens who have complaints of financing, they can report to his office or to the district head.