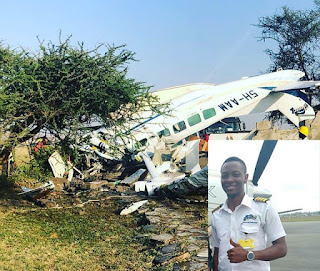 Two People Dead After Airplane Crash Tanzania
Nelson Mabeyo, the son of the Chief of Defense Forces of Tanzania (CDF), General Venance Mabeyo was among the two people killed in an Auric Company plane crash that occurred this morning on Monday, September 23, 2019.

Nelson was the pilot of the plane that crashed at Seronera Airport located inside the Serengeti National Park in Tanzania.


The plane crashed in the morning as it flew from the airport to Arusha.