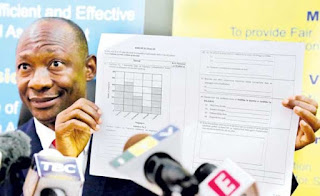 The National Examinations Council (NECTA) has announced the results of the Seventh Class held on September 11, 2019 and said the performance has increased by 3.78%.  Graduates make up 81.50 percent of 933,369 candidates.  909 Candidates have also been canceled for various reasons including fraud.

NECTA said they have identified Principals, Supervisors and guards involved in the fraud.

Necta Executive Secretary, Dr.  Charles Msonde made the remark today when announcing the results of the seventh class and explained that in the sitting session today they had already informed the labor and law enforcement authorities to take action against those who were responsible for the fraud.  Where now fraud has generally decreased while in 2011 it was 9,736 and this year it has reached 900.

He said the third place winner was Loi Kitundu from Mbezi Primary School in Dar es Salaam, and Victor Godfrey from Graiyaki in fourth place.

"In academic performance, the English, English and Science subjects in the exam have improved and the subject in Mathematics has dropped," said Msonde.