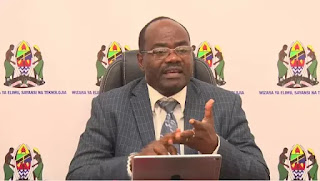 That was made clear in Dodoma by the Secretary of the Ministry of Education, Science and Technology Dr. Leonard Akwilapo while speaking to reporters about the exams which are expected to start from 2020.

He said it is focusing on efforts to promote and spread Swahili language around the world by ensuring that it is one of the 10 most widely spoken languages ​​in the world.

"You will remember that National Father  Julius Kambarage Nyerere has made great efforts to promote and propagate the Swahili language as well as manage its quality locally and abroad as well as the following" said Dr Akwilapo.

He said the exams would be held six times a year in line with the duration of the Swahili lessons at each level and would be done electronically at various Swahili colleges and centers around the world that already had specific agreements.

"CKD (UDSM), becomes the first University in the world to administer these exams and administer its examinations and corrections and to issue an International Certificate that reflects the qualifications of the candidate," he said.

He noted that the College has taken on the responsibility of establishing standardized International Language Skills Examination and that the international language is more powerful is administered for examinations so that those studying the languages ​​can be evaluated and obtained certificates.

He said there was already an agreement between the Swahili teachers of the University of Dar es Salaam and the teachers who teach Swahili at foreign universities regarding the exams which will start next year.

"The University of Dar es Salaam is prepared to ensure that Information and Communication Technology systems are effective in facilitating these examinations effectively and internationally as there is a need for examiners in their home countries, not to exclude travelers and to conduct their exams.  they are in Tanzania, ”he said.

On the other hand, the Director of the Institute of Swahili Professionals, Prof. Aldin Kai Mutembei, said the exams would be named by MKUKi.

"There are many students studying Kiswahili out there and they wanted to come to Swahili-speaking countries but they would like to make it known that they know Swahili is what we aim for," he said.

He noted that the University of Dar es Salaam, will ensure that they become good representatives of the government in promoting and developing the Swahili language.